All exams performed at AU Health Imaging are read and interpreted by AU Health’s sub-specialized Radiologists. AU Health’s board-certified radiologists provide specialized reads for abdominal, thoracic, breast, musculoskeletal, neuroradiology and pediatric radiology. Their specialty training and extensive experience in their area of expertise mean referring providers and their patients can be confident in the diagnostic results they provide. AU Health’s radiologists are on site at the imaging center and welcome opportunities to consult with referring physicians. 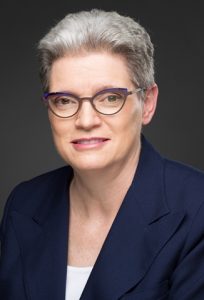 Dr. Annette Johnson, an established leader, mentor and patient advocate who specializes in neuroradiology and brain tumor imaging, joined the Medical College of Georgia faculty as chair of the Department of Radiology and Imaging on August 1, 2018.

At the time of her appointment as chair of the Dept. of Radiology and Imaging, Dr. David Hess, dean of the Medical College of George at Augusta University said, “Dr. Johnson is an instinctive and inclusive leader who is already invested in the success of the faculty, staff, students and residents who are the MCG Department of Radiology.” He went on to say, “Like other great leaders, she appreciates both the individual and the team, recognizes potential and is experienced at helping others realize potential.”

Prior to coming to MCG, Dr. Johnson served as vice chair of quality and patient experience of the Department of Radiology at Wake Forest University School of Medicine.

Dr. Johnson has been named to Best Doctors in America® since 2009 and Castle Connolly’s America’s Top Doctors® since 2010.

Her previous academic appointments include joining the faculty of the University of Alabama at Birmingham Department of Radiology in 1998 after completing her fellowship training at Washington University. The next year, Johnson was named chief of the Neuro MRI at UAB. Dr. Johnson joined the faculty of the Indiana University Department of Radiology in 2001, and two years later was named chief of the Neuroradiology Division.

Dr. Johnson is a 1992 graduate of the Medical College of Virginia, completed a diagnostic radiology residency at Pennsylvania’s Geisinger Medical Center; a neuroradiology fellowship at Washington University’s Mallinckrodt Institute of Radiology in Missouri, where she was the liaison to neuroradiology administration; and a general medical services fellowship in the Washington University Department of General Internal Medicine. Johnson also has a Master of Science degree in clinical research from Indiana University.